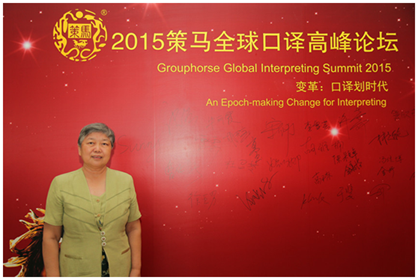 Ms. Yanan Xu is a former Director-General of the Department of Translation and Interpretation at Ministry of Foreign Affairs of the People’s Republic of China, former Chief of the Chinese Translation Service of the Documentation Division of the Department for General Assembly and Conference Management (DGACM) at the United Nations, Executive Director of the Translators Association of China, a Council Member of the U.N. Association of China, and a member of the International Federation of Translators. She is also a visiting professor at the Graduate School of Translation and Interpretation, Beijing Foreign Studies University, and the School of Foreign Languages, Shanghai Jiao Tong University, and a Senior Advisor at Grouphorse.

As a former Chinese Ambassador to the Republic of Trinidad and Tobago, she has translated many books, including 1999 Victory without War, White House Years, The Long March: The Untold Story, A Drop in the Bucket, The Civil Aviation Administration of China: A Soaring Phoenix, Contemporary China’s Foreign Affairs, The Diplomacy of Zhou Enlai, On Deng Xiaoping Thought and New China’s Diplomacy in Five Decades.

She has written the Translation and Interpreting in Foreign Affairs.