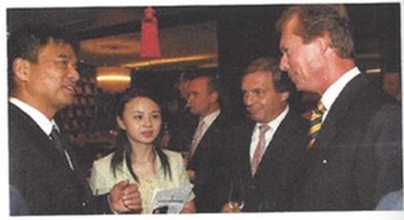 Ms. Jin interprets for Henri, the Grand Duke of Luxembourg

Ms. Meng Jin graduated from Nanjing University with a master’s degree in translation studies and Newcastle University with a master’s degree in simultaneous interpreting. She started her career in 2000 and translated a book one year later. She has been doing foreign affairs interpreting since 2002 and two years later she started to work as a simultaneous interpreter.

Ms. Jin has interpreted at about 1,000 major international conferences and ceremonies so far. Jin’s long-term clients include the WHO, the United Nations Development Programme, the United Nations Environment Programme, the UNESCO, the World Bank Group, the Beijing Organizing Committee for the Games of the XXIX Olympiad, the Special Olympics World Summer Games Shanghai 2007, the Coordination Bureau of Shanghai World Expo, central government ministries, and foreign embassies in China. Ms. Jin is now a visiting lecturer at Newcastle University.