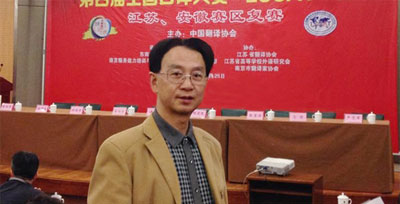 ▲Prof. Cao as a judge at the Jiangsu Province and Anhui Province division of the Fourth National Interpreting Competition.

He has authored 38 publications and his students include Hua Chunying, Deputy Director of the Foreign Ministry Information Department of China, Ma Ainong, translator of Harry Potter, Liu Xin, a hostess at the China Global Television Network and the winner of the first “21st Century” Cup National English Speaking Competition.