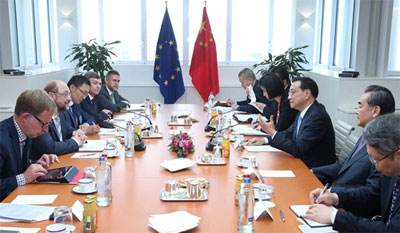 Mr. Guangbo Zhang (third from left) and Ms. Lu Zhang, a famous interpreter working at the Ministry of Foreign Affairs, interpret at a meeting attended by Premier Li Keqiang and Martin Schulz, former President of the European Parliament.