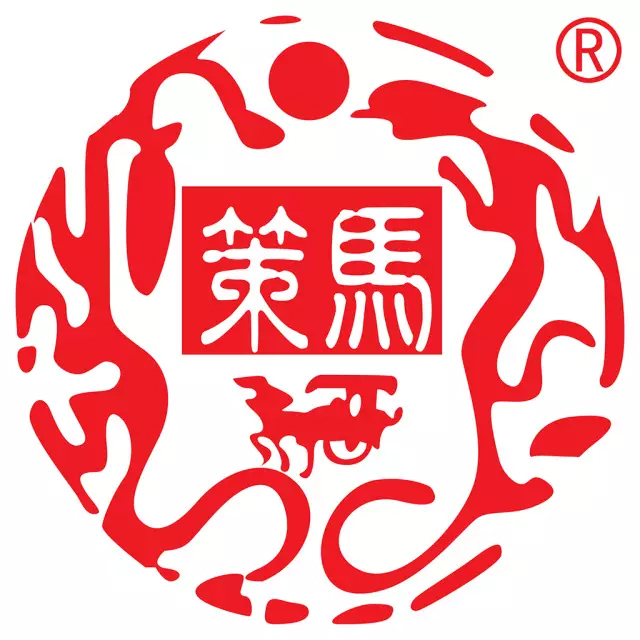 An interpreting camp was launched by Grouphorse from December 13 to 22 in the US where the camp members took an interpreting training session at the UN, attended a banquet dinner featuring guests such as Ban Ki-moon, UN General Assembly President Peter Thomson, former UK Prime Minister Gordon Brown and Leonardo DiCaprio. They provided whispering interpreting services for Chinese guests at the banquet dinner.

Coming after previous camps launched by Grouphorse in London, at UN agencies and in Silicon Valley in the past few years, this interpreting camp, which underscored globalization and the national drive to further open up education and promote Sino-foreign cultural and educational exchanges, brought interpreting learners to places including the Wall Street, UN headquarters, Princeton University, Yale Club, Columbia University, Metropolitan Museum of Art, Barclays Center, American Museum of Natural History, the Statue of Liberty, Rockefeller Center and Google’s first pop-up store.

Their language skills, understanding of the world, character traits, social skills have all developed during the camp. 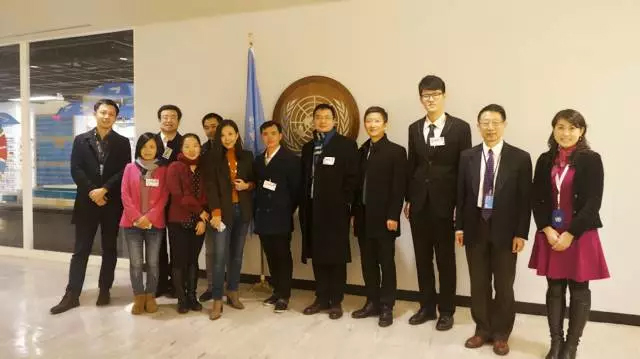 The camp at UN headquarters.

Visit to the UN Headquarters

It was the first time that UN headquarters had welcomed a delegation from the translation industry in China. 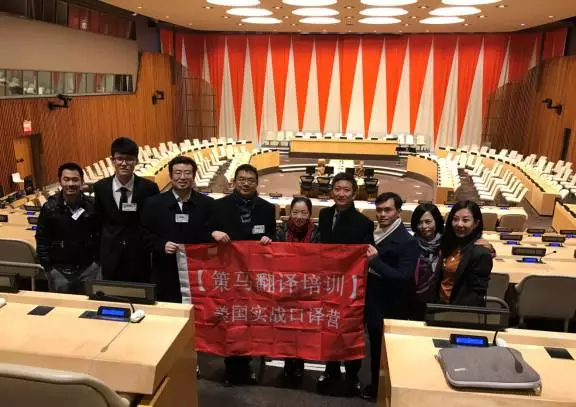 The interpreting camp in the UN Economic and Social Council Chamber.

The camp members were all given a Visitor’s Pass to visit many UN departments and meeting rooms. 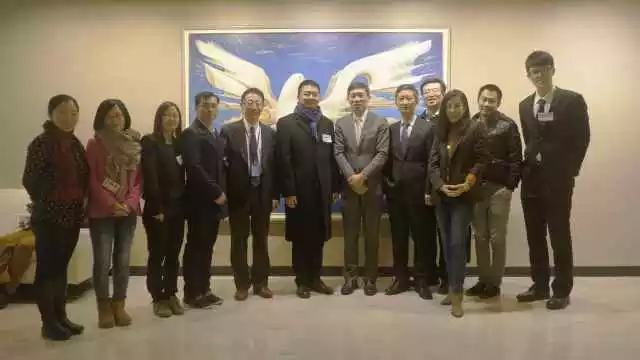 The camp members visited some places open to public such as the UN Economic and Social Council and UN Trusteeship Council. They also visited the UN Secretariat accompanied by UN staff and UN delegates’ lounge and UN Learning Center.

They were the first visitors to see the portrait of Ban Ki-moon made before he left the UN, which was unveiled on December 13 in an area closed to public. They also were given the chance to stand on the UN General Assembly podium and talked to UN Assistant Secretary-General Xu Haoliang. Camp members in front of the portrait of Ban Ki-moon. 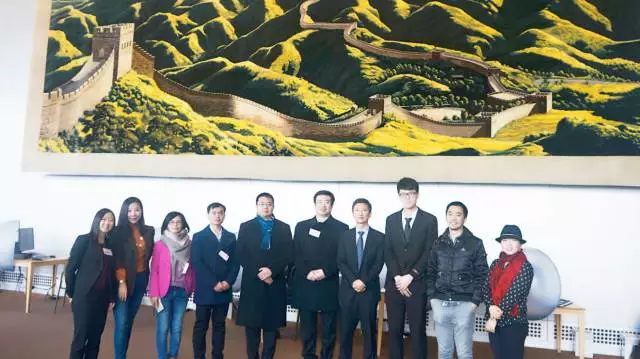 Camp members in front of the tapestry given to the UN by China in the Delegates Lounge. 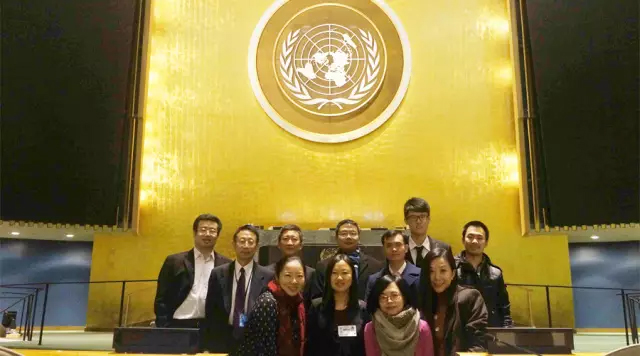 Camp members in front of the UN General Assembly podium. 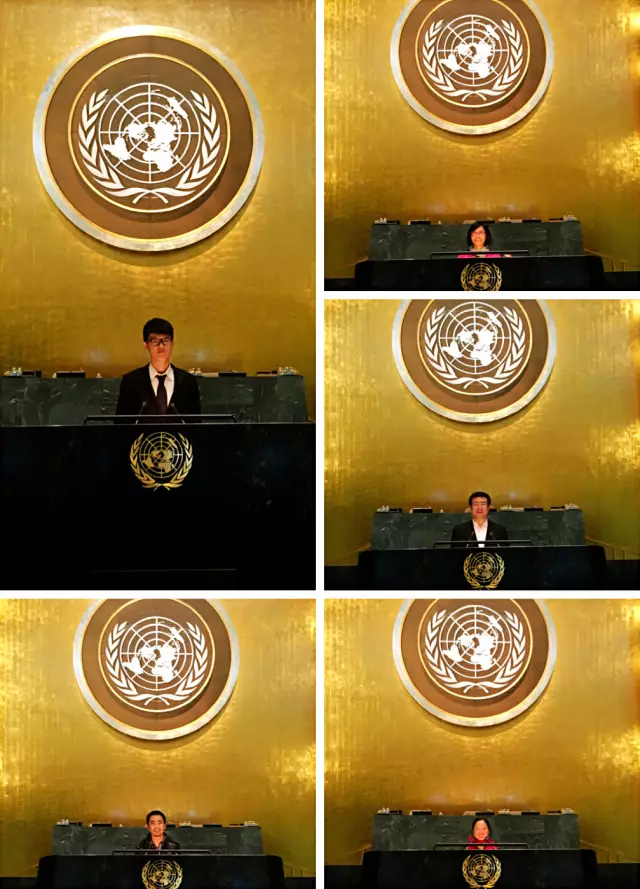 After visiting UN departments, the camp members joined a training session where they weretaught by both Chinese and foreign teachersand. They learned the work flow ofworkflow for translation services at the UN and interpreting materials covering hot topics such as peace-keepingpeacekeeping, climate change and the Paris Agreement, which. This helped them build a complete and diversified understanding of the job. Camp members at the UN cafeteria.

The camp members had lunch with UN interpreters and used the eLUNA, a computer-assisted translation system, on the morning of December 20.

Alex, leader of the camp, gave a Christmas gift to Chen Qiong, a former Grouphorse interpreting trainer who now works at the UN. 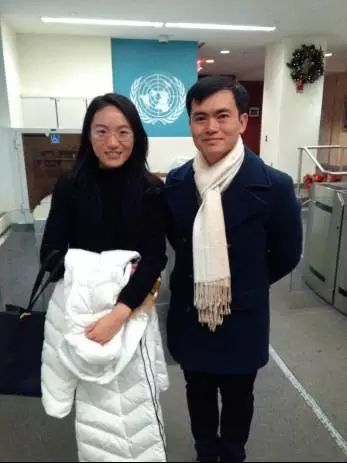 Camp members were invited to join the UN Correspondents Association (UNCA) 21st Annual Awards at Cipriani Club 55 on Wall Street in New York as a part of interpreting practice. 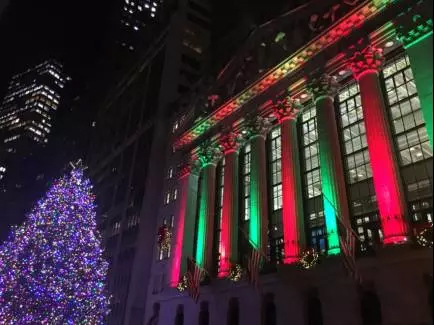 The Cipriani Club 55 on Wall Street during Christmas.

Before Christmas, the UNCA honors the winner of the UNCA Global Citizen of the Year and winners of the Annual UNCA Awards for the best print, broadcast and electronic media coverage of the UN, UN agencies and field operations. The 21st Annual Awards was attended by media moguls, business tycoons, celebrities, and media outlets such as CNN, the New York Times, PBS, ABC, UN Web TV, UN Radio, Warner Bros. TV, Congress Web TV and other mainstream media outlets from countries around the world with their correspondents in the UN. Mr. and Mrs. Ban Ki-moon at the dinner. 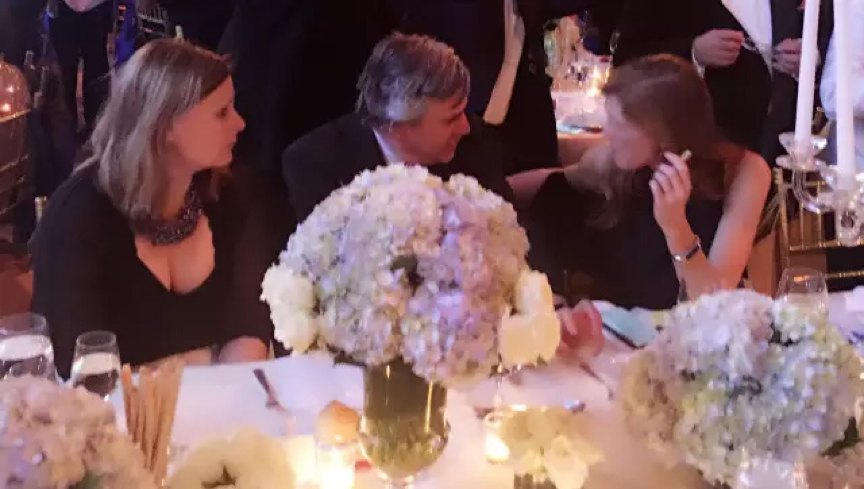 Guest of honor UN Secretary-General Ban Ki-moon celebrated his final year at the dinner and played a video where he made fun of himself. Ban Ki-moon during a speech. The fun video of Ban Ki-moon.

Oscar winner, Leonardo DiCaprio, delivered a speech as a recipient of the UNCA Global Citizen of the Year presented by Ban Ki-moon. He is also an environmentalist and a UN Messenger of Peace working on addressing the effects of climate change. 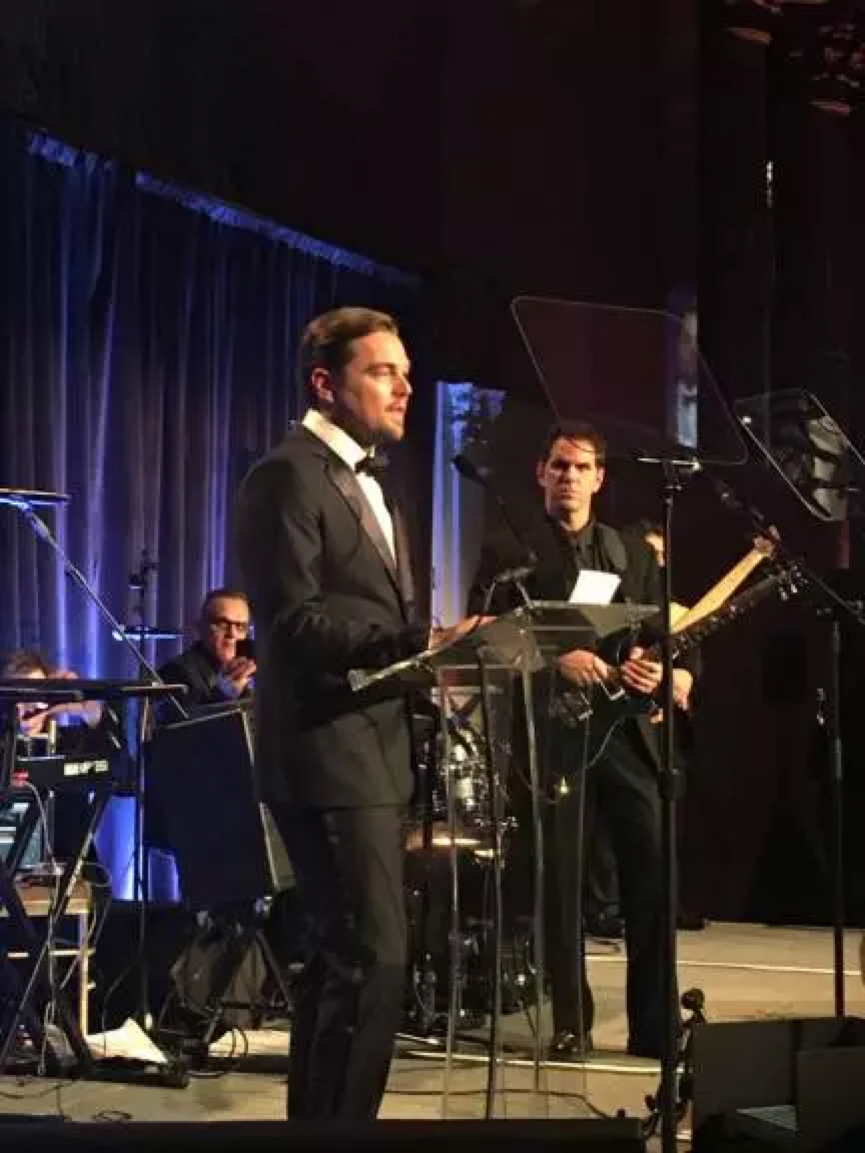 Ban Ki-moon presents the UNCA Global Citizen of the Year to Leonardo DiCaprio. Visit to the Ivy League Schools The camp visited the Rare Book and Manuscript Library in Butler Library at Columbia University. The library was the birthplace of oral history and interviewed major figures from the Republic of China, such as Li Zongren, Hu Shi, Kong Xiangxi, Chen Lifu, and Gu Weijun. The Rare Book and Manuscript Library is on the 6th floor of Butler Library. The transcript with revision (words in red) made by Hu Shi. Some major collections in the Princeton University Art Museum.

What’s worth mentioning is that the camp members had the chance to see the oldest editions of Shakespeare’s works in the exhibition “Remember Me”: Shakespeare and His Legacy presented in the museum. 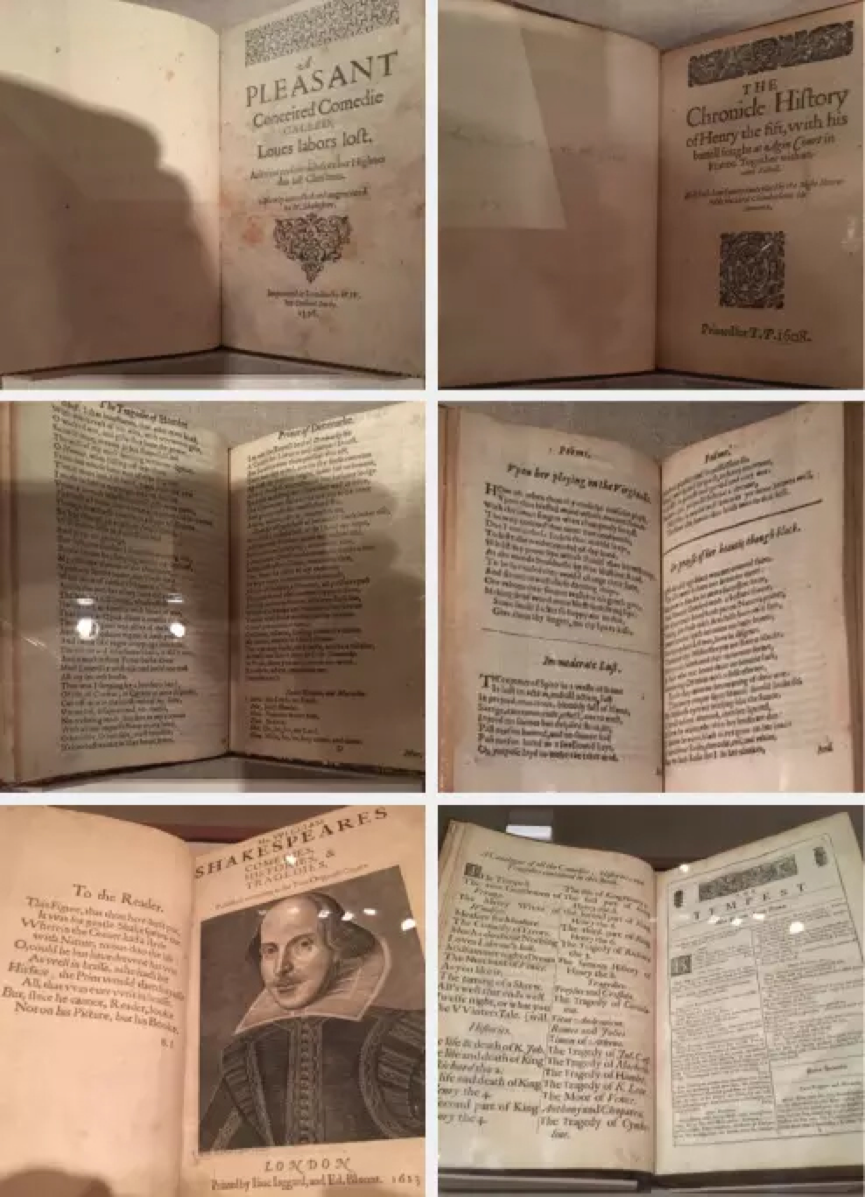 Collections of the “Remember Me”: Shakespeare and His Legacy exhibition. 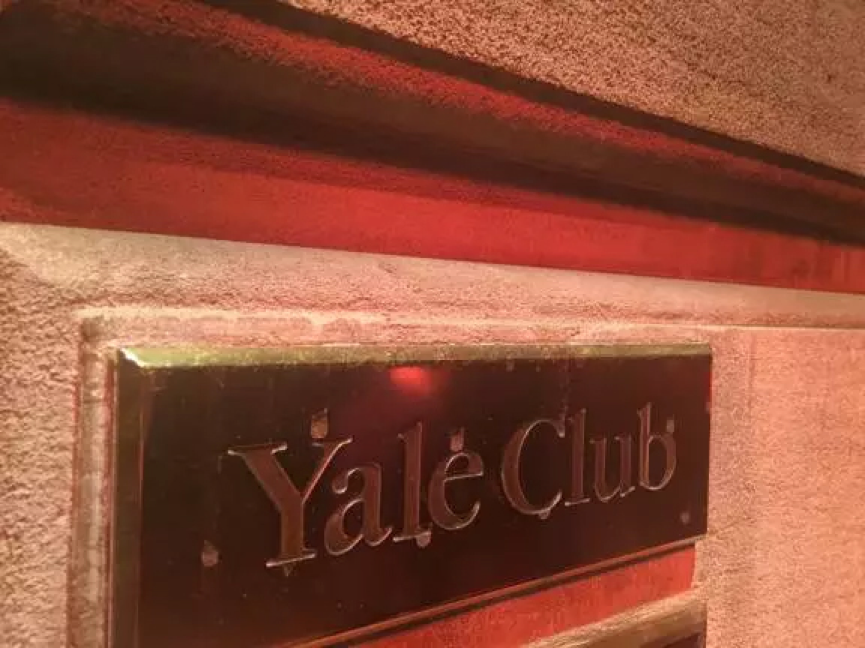 The camp visited the Yale Club where a salon titled Election 2016 - Jewish and Historical Perspectives was held, which was filled with critical thinking and thought-provoking give-and-takes. 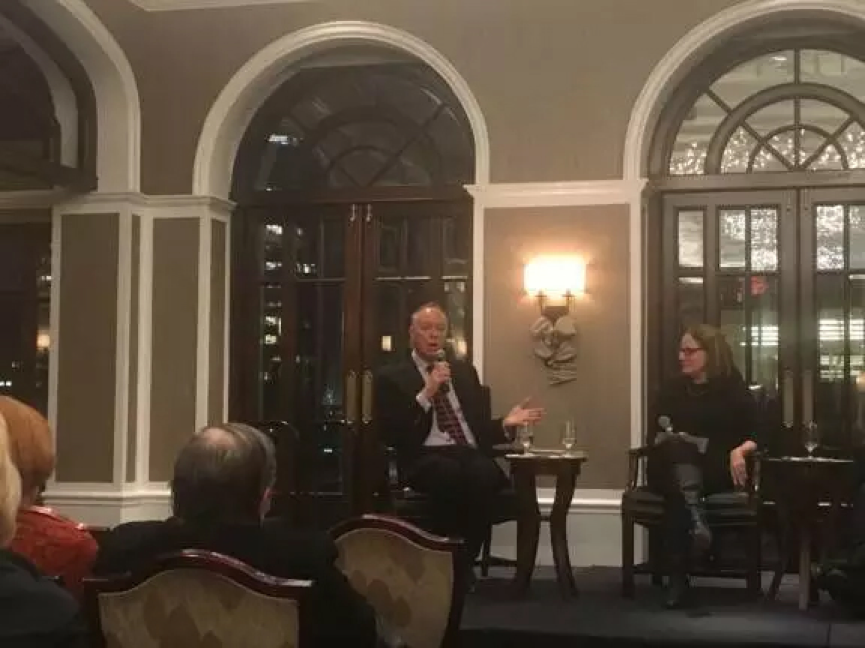 Steven B. Smith, the Alfred Cowles Professor of Political Science at Yale University (known to most people for his courses in the Open Yale Courses Series).